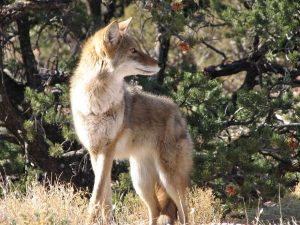 Coyotes are found throughout most of California. These animals are very adaptable and inhabit most areas of the state with the exception of major metropolitan areas. They’re medium size animals belonging to the dog family.

Coyotes have a distinctive voice consisting of various howls, high-pitched yaps and an occasional dog-like bark. Coyotes are proficient predators, possessing the speed, endurance and strength required to tackle prey as large as adult deer.

Coyotes can cause significant damage. They often kill sheep and calves. They can also bite holes in drip irrigation pipe and damage garden items such as watermelons, citrus fruits and avocados. In suburban areas, they prey on domestic house cats, small dogs, poultry and other domestic animals. Coyotes have been known to attack humans.

These animals often carry parasites including ticks, fleas, worms and flukes. Heartworm is one of the most important endoparasites in the California coyote population and can be transmitted to domestic dogs by mosquitoes. Rabies and tularemia also occur and may be transmitted to humans from other animals.

Coyotes, like many wild animals are attracted to suburban areas due to easy access to food, water and shelter. Reducing or eliminating the availability of these elements will encourage coyotes to leave.

Additionally, to exclude coyotes, fences should be constructed which are at least 5 feet, 6 inches tall. These can be made of solid wood, cement block, brick or wire.

Brush and vegetation should be cleared from backyards and adjacent areas to eliminate habitat for prey, which could attract coyotes. Landscaping should be pruned on a regular basis. These actions remove the hiding cover used by coyotes to stalk domestic pets.

For additional information and photos, use the Google Search.
Search for coyotes.