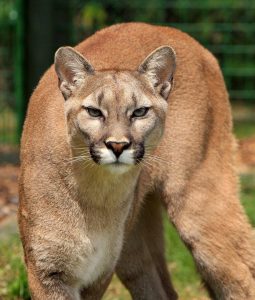 Mountain Lions are the largest native North American cat except for the slightly larger jaguar. These animals are primarily nocturnal, elusive, shy and solitary – except during the breeding season when the young are traveling with the female.

These animals are very fast over a short distance. Due to a relatively small lung capacity they cannot run great distances. They are agile tree climbers.

Because mountain lions are nocturnal, they prefer to hunt at night and their favorite prey is deer. They have been known to prey on rabbits, beaver, porcupines, skunks, domestic livestock, pets and other small mammals, birds and even fish.

Mountain lions are significant predators of sheep, goats, horses, cattle, house cats, dogs and poultry. Damage is often random and unpredictable. However, when it does occur, large numbers of livestock can be killed in short periods of time – a behavior known as surplus killing.

In general, mountain lions seem to be relatively free of ecto-parasites. However, rabies, feline leukemia and Lyme disease have been documented in California mountain lions.

Mountain lions are attracted to suburban areas because of easy prey such as domestic pets and deer. Younger mountain lions may also end up in these areas trying to establish their own territories. Removal of brush within 1/4 mile of building or livestock and pet enclosures may help reduce the threat.

The California Department of Fish and Wildlife provides a brochure “Living with California Mountain Lions” which suggests the following things to do if you encounter a mountain lion:

• Keep children close to you: Observations of captured mountain lions reveal that the animals seem especially drawn to children. Keep children within your sights at all times.

• Do not approach a mountain lion: Most mountain lions will try to avoid a confrontation. Give them a way to escape.

• Do not run from a mountain lion: Running may stimulate a mountain lion’s instinct to chase. Instead, stand and face the animal. Make eye contact. If you have small children with you, pick them up if possible so they don’t panic and run. Although it may be awkward, pick them up without bending over or turning away from the mountain lion.

• Do not crouch down or bend over: In Nepal, a researcher studying tigers and leopards watched the big cats kill cattle and domestic water buffalo while ignoring humans standing nearby. He surmised that a human standing up is just not the right shape for a cat’s prey. On the other hand, a person squatting or bending over looks a lot like a four-legged prey animal. If you are in mountain lion country, avoid squatting, crouching or bending over.

• Do all you can to appear larger: Raise your arms; open your jacket if you are wearing one; pick up small children; throw stones, branches or whatever you can reach without crouching or turning your back; wave your arms slowly and speak firmly with a loud voice. The idea is to convince the mountain lion that you are not prey and that you may be a danger to it.