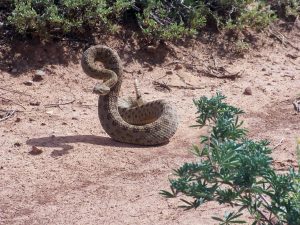 Coexisting With The Rattlesnake

Spring and summer are the Rattlesnake seasons, especially if you live in an area where there is a large amount of brush nearby. But the danger can be minimal if you understand
1) How to keep Rattlesnakes out of your yard,
2) What to do if you encounter one.

How To Identify A Rattlesnake, and What To Expect

Rattlesnakes can easily be identified by their broad, triangular heads, narrow necks, relatively heavy bodies and a rattle on the tail, or blunt tail if the rattles are missing. Baby Rattlesnakes are just as dangerous as adults. At birth, a ‘pre-button’ is present at the tip of the snakes tail; it’s replaced by a button several days later when the first skin is shed. However, no sound can be made by the rattle until a second segment is added when the skin is shed again. Rattlesnakes should not be confused with the harmless Gopher snake, which are beneficial to humans as vermin catchers. (Both have blotch like markings down the back.)

Rattlesnakes will purposely attack only animals smaller than themselves, such as rodents, unless they are frightened by noise, vibrations or certain odors. They are afraid of humans (mainly because of our size) and would rather run than fight if possible. Like all snakes, the body temperature of the Rattlesnake depends on the air temperature. Therefore, you are most likely to encounter a Rattlesnake in the open during the warmest hours of a spring day and during the cooler hours (morning and evening) on a summer day.

Rattlesnakes come into residential areas for two reasons – food and cover. You can reduce the likelihood of encountering a Rattlesnake by taking precautions.

Eliminate food attraction (rodents) by:
• Keeping your yard free of places where mice and rats might nest, such as piles of grass cuttings or wood and trash.
• Plugging all ground openings, such as gopher holes.
• Using only covered trash containers.

Eliminate the cover attraction by:
• Making sure there are several inches of ground clearance under shrubs.
• Avoiding tall ground covering.
• Moving hiding places such as large rocks or rubbish. If your property backs up to a canyon or other uninhabited area, you should clear a strip of 30 to 100 feet, or cut back the chaparral to waist height and thin enough to let sunlight filter through.